Recently, I had the opportunity to re-watch one of my favorite movies, Rise of the Guardians. If you are unfamiliar with the film, The Guardians are a group of immortals who were chosen by the Man in the Moon to be the protectors of hope and belief in children everywhere. You know them better by the names they were given: Santa Claus, The Tooth Fairy, The Sandman, and The Easter Bunny. In the movie, Pitch, the creator of nightmares, is tired of all this hopeful, gleeful belief stuff and sets out to destroy it in the hearts and minds of every child in the world. Essentially, he wants to turn them into cynical adults which is very scary indeed. The issue is that Pitch is angry because children don’t believe in him anymore and he’s feeling more than a bit neglected. The Man in the Moon, sensing The Guardians might need a little help defeating Pitch, chooses the newest Guardian, Jack Frost.

Jack, aside from being the youngest of the Guardians, has a unique understanding of what makes children tick because he’s closer to their age (close of course is relative considering the rest of the Guardians have long since earned their AARP discounts) but he has a little bit of a problem. When it’s Christmas time, children don’t question where the presents came from. They know. When they find the first painted egg under a bush, get a good night’s sleep, or find the dollar under their pillow they don’t wonder where they came from either. But when they get a snow day, they don’t thank Jack Frost. Why? Because, like Pitch, children don’t believe in him either. Actually, they don’t even really know he exists. So. what’s an entry level Guardian to do? Get advice from someone who has centuries more experience at this protector of children thing and who better to get advice from? Yup. Santa Claus.

Santa is a very tall, very large, very muscular, man from Bavaria who has the naughty and nice lists tattooed on his ridiculously huge and chiseled forearms. Not the image I was expecting but neither was the 6-foot 3-inch Easter Bunny with an Australian accent. Nevertheless, in spite of his Arnold Schwarzeneggeresque appearance, he asks Jack a question that we would all do well to consider as this year draws to a close (There’s only 3 months left folks). What’s your center?

Author Simon Sinek, might put the same question like this: What’s your why? In his book Start with Why, Sinek explores the similarities between great leaders and companies like Steve Jobs, Martin Luther King, Jr., the Wright Brothers, Harley Davidson, John F. Kennedy, and Southwest Airlines and how they are able to inspire people. What he discovers is they all ascribe to one fundamental idea: people are more likely to be moved by WHY something is done before they are concerned about the HOW or the WHAT. The WHY is your purpose, what you believe in and it sits right at the center of The Golden Circle. *He gives a great TED Talk about this subject. Click here to view it.* 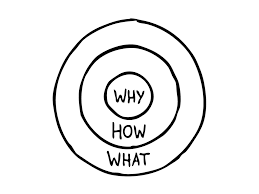 In order for Jack to protect the children, in order for them to believe in him, he had to identify his center, his WHY. What was it, at his very core, that made him who he was?

I’m not going to spoil it for you, but he does eventually figure out what his WHY is. The question that I now ask is, have you? In what do you fundamentally believe? What drives you? What is your passion? What is your purpose? When times get difficult, as they ultimately will, I encourage you as I encourage myself to remember who we are at our core just in case we forget. We can always find the answers at our center.